I encountered a pleasant surprise during my Surgery 401 orientation. The session discussed basic logistics of the surgical rotation and what we medical students could expect over the coming months. The room of 30 or so third-year medical students was buzzing with nervous excitement as we learned about Grand Rounds, 30-hour shift limits, and when to wear our white coats.

The books were massive tomes, filled with hundreds of pages of detailed descriptions and diagrams. What I was most excited to see on the screen in front of me, however, were two familiar Thomas Eakins paintings, serving as the cover art for these required texts: The Gross Clinic and The Agnew Clinic. I remembered both fondly from my time at Cornell in an art history seminar.

My first reaction to seeing both paintings again for the first time in several years was that of quick joy in the recognition of title, painter, dates, and media, just as I had been trained in my former art history studies. I wondered if any of my classmates were familiar with these famous works, or noticed the cover art. I peeked around the room searching for eyes that were also twinkling at seeing the works, but did not find any. I found it interesting that both of these works had been chosen by the publisher, as they have had such unique significance in history.

Thomas Eakins, the artist, had a sordid past. He worked in Philadelphia in the late 19th century, at the time a center of intellectualism, science, and democracy in America . Eakins was captivated by the use of the human body as narrative and would often use anatomical dissections while teaching art to university students. However, he was met with resistance for his fondness of the male nude form. The general public at the time was more comfortable and familiar with the female nude and it had a greater acceptance for consumption as art. In this Gilded Age of America, males and females had unique gender spheres and society was tied to these constructs. Eakins was eventually fired from his position as an art professor.

The Gross Clinic was painted by Eakins in 1875. As I scanned the familiar image, I felt myself slip into art historian mode. The painting features Dr. Samuel Gross, an orthopedic surgeon with whom Eakins studied. Eakins wanted to present the magnificence of medicine to the general public through art. In the center of the painting is an obscured and foreshortened, faceless patient. Three men in formal suits make an incision on the lateral thigh as Gross, hand bloodied, looks off. To the left of Gross is a seated woman whose hands are clenched and clawed in front of her face. She appears to be reacting to the operation before her. The painting was rejected by The Centennial Exhibition — a major art showing at the time — because it was thought to be too gruesome. It was instead displayed in a first aid clinic.

The Agnew Clinic was painted by Eakins in 1889, commissioned by Dr. Agnew’s students. It strikes me as so different from The Gross Clinic. While it also boasts a pride of science, reason, and intellectualism, Agnew stands as a singular figure in the image – glowing white as if he is the room’s light source. His gloves are unbloodied and his white smock is clean. He represents knowledge, reason, and purity. He is is a stark juxtaposition to the representation of Dr. Gross. The men around the operating table are also dressed in white. In this operating theater, we as viewers of the painting are sitting in on a mastectomy. An incision is being made on the breast which is furthest from us, hiding it away from our view. We see the patient’s exposed right breast. Her face is visible, though shadowed. A nurse looks on, the only conscious woman in the room, as if protecting the motionless and nude patient from the gaze of the many men eagerly seeking a better view. She is a chaperone and is stoic compared to the grimacing female in The Gross Clinic. 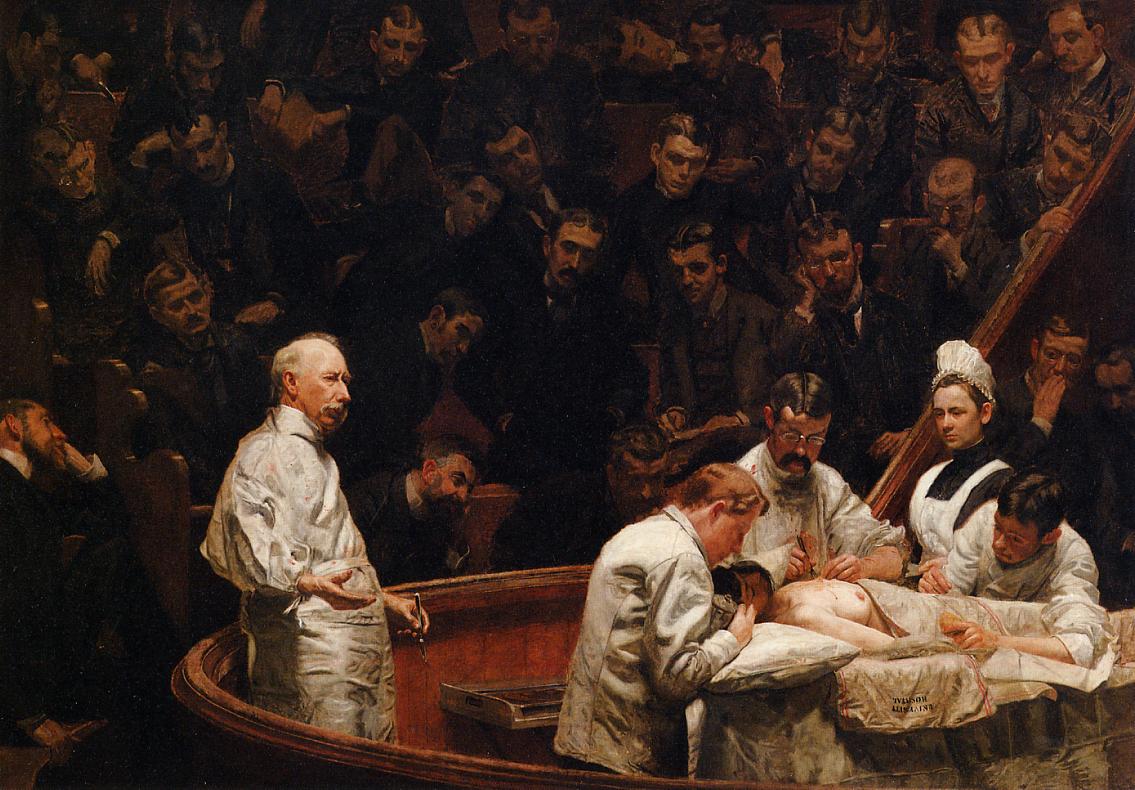 I wonder if the publisher of these two Lawrence texts knew anything about Eakins, or Dr. Gross, or Dr. Agnew, or the art and American history that surrounded the creation of these two paintings. I wonder if they just saw the paintings as representations of surgery, and therefore found them an apt fit for a text on surgery. I wondered if any of my classmates appreciated either painting before quickly jotting down the text titles for later purchase on Amazon.

As a medical student who studied humanities, I can sometimes feel separate from my classmates who focused their efforts solely in the sciences. The experience of being reacquainted with these images made me grateful for my different perspective and ability to find enjoyment in topics outside of the sciences, but also made me aware of my differences. The few moments of diving back into my humanities past felt refreshing and also isolating – like a fleeting nostalgia.